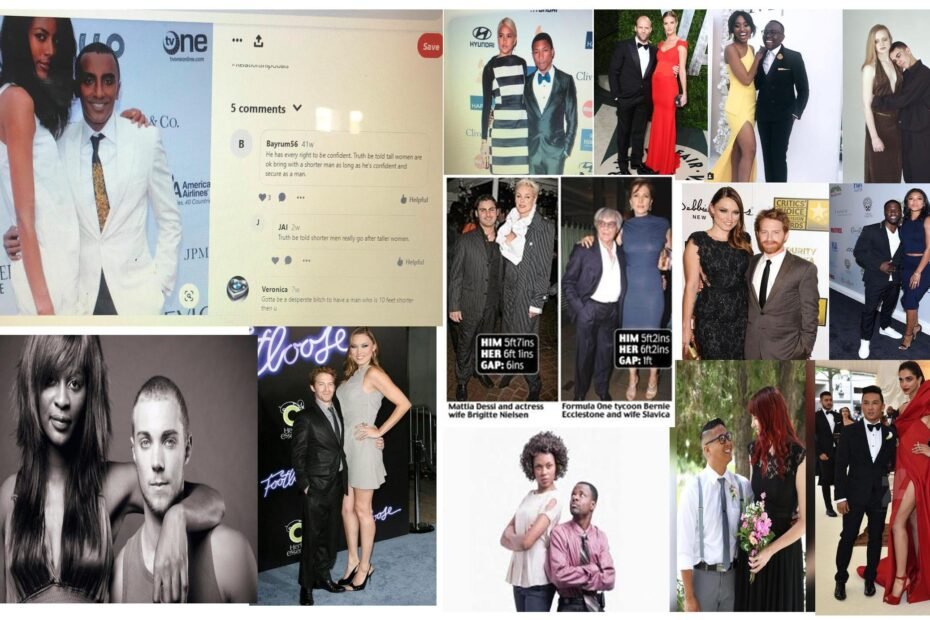 Do Tall Women Date/Marry Short Men? Some Do, some Don’t. Some Won’t, Some Will, Some Maybe, I Have. While speaking in the general, I’m also speaking from personal experience. As what’s considered to be a very Tall women, I am 5′11″, and I have dated men shorter than myself, usually no shorter than about 5′8″, robed 3″. (relationship) The fact that they did not mind our height difference (after all they were attracted to me) to be an attractive quality, it revealed that the confidence in his abilities and himself went beyond just his height. It also made me feel appreciated and seen as more than just “the tall girl” what’s even more amazing, him not bothered by my high heels, but looked upon it as most attractive. When we’re out enjoying each other’s company or laughing on the phone, or just sharing silly moments, height is really the last thing we would be thinking about. It my believe that Tall Women, like everyone else is just looking for a caring, loving partner, who respects them. To think being Tall, is just something that somehow does define the tall women and her interests is ridiculous; what about all the other attributes that makes Tall Women Beautiful. Tall men tend to date women shorter than themselves, this leaves a relatively small number of tall men available to date tall women, even though many tall women prefer to date men taller than themselves. I think it’s an example of confirmation bias, and the tall woman/short man relationship you think of just stand out because we’re culturally conditioned to find them odd. Society dictate to us that men should be taller than the women they date, and couples that don’t look like this are often made fun of. I prefer to date someone taller since being tall is already outside of social norms, so dating someone shorter would make me subject to being outside of two social norms. In the case where the guy is extremely confident and not totally ridiculously shorter than me, I could make an exception based on his character and my attractiveness towards him. Most tall women don’t mind there’s a height difference, I don’t however, I do mind dating someone who is so insecure about their masculinity that my height becomes an issue. Therefore, does it make sense to tailor our prospects around height? https://www.rewire.org/short-tall-hung-up-on-height/ The things that tall women have to deal with almost on a daily basis and it’s annoying is guys who can’t get over their own insecurities about my height. Listening to guys say every time they see me, “Wow, girl, you’re tall!” or “Man, why are you so freaking tall?” a turnoff, be it friend or relationship.  Some of the ridiculous questions tall women receive are “what is it like to date a shorter guy?” why is it much different than dating a taller one or someone the same height; what matters is the quality of the guy and not his height. As soon as you don’t fit the picture, and especially if it’s in a romantic situation, everyone would like to give you their opinion instantly.”

Some Annoying comments Tall women with Short Men are tired of hearing 1) “I could never date a guy who’s shorter than me!” 2) “You probably have some weird short guy fetish.” 3) “If I were you, the height difference would stress me out!” 4) “You guys are so cute!”    5) “Don’t you feel uncomfortable next to him in heels?” 6) “He must have an inferiority complex.” 7) “Things must be *awkward* in the bedroom.” 8) ” you have to be a desperate B, to date someone shorter than you”. 9) ” I don’t l know, I would feel funny kissing a guy that’s shorter than me”. 10) ” She is sooooo much taller than him,” one Instagram user commented. “And why does she wear such high heels?” another wrote. “I mean, there’s nothing wrong with being taller than your partner, but it just seems uncomfortable to accentuate it like that.” When it comes to height and romance, I believe it’s difficult to put the thing that have made one feel self-conscious about in life that you already vulnerable about. It’s hard enough been teased about height, and feeling or been told you’re not attractive, your legs are long and your torso is short, as though you didn’t already know; or everyone assuming your tallness means you played basketball.  Graciously, the guys that have been attracted to me have been shorter, and when I was younger It used to frustrate me, but now embrace. The fact that guys has such confident, secure and courage in himself to want to date my 5’11” ass I am challenged and love breaking stereotype. Studies show that men are much more open to dating someone outside of their height requirements than women are. “Twenty-three percent of men but only four percent of women said they were open to a relationship in which the woman was taller,” a Huffington Post article explained. Now we’re passed the negative, here are: According to https://www.cosmopolitan.com/sex-love/a8060084/tall-women-dating-shorter-men-reasons/ 7 Reasons You Should Date Guys Who Are Shorter Than You 1. Guys who are comfortable with you being taller are likely comfortable with your ambition, intellect, and talent too. 2. You don’t have to make any calculations about the height of your heels.  While other women might feel like they have to pass on a perfectly cute pair of shoes or stick to flats so they stay shorter than their dates, you’re already taller than your man in bare feet, what’s the difference between being 2 inches taller or 5? Wear whichever killer heels your heart desires. 3. You’ll dramatically expand your dating pool. Finding someone who is socially, emotionally, intellectually, and sexually compatible with you is hard. Yes, it makes sense to narrow your pool of potential suitors based on what you value — it’s very reasonable to look for someone with a basic understanding of grammar, for example — but too long a list of non-negotiables can blind you to people who could make you very happy. The CDC has reported that about 59 percent of U.S. guys from 20 to 29 years of age are under 5-foot-10, the average male height, while only about 20 percent of guys exceed the 6-foot mark. If you “only date” men at least 6 feet tall, you’re shooting yourself in the foot as far as selection. 4. Dating shorter can help you get over your own insecurities about size. 5. Research suggests that short men do a larger share of the housework. 6. Short men may also earn a larger share of the household income.  7. Short men are least likely to divorce. Finally, the paper showed that while divorce rates for tall and average-height men were comparable, they were 32 percent lower for short men. Maybe short men’s partners are enjoying sharing the housework, financial support, and willingness to flout stereotypes in favor of a strong relationship. Also read in: https://www.tapinto.net/towns/kenilworth/categories/guest-column/articles/tall-women-short-men