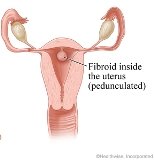 What are fibroids? Fibroids are small growth and tumors made of smooth muscle cells and fibrous connective tissue that develops in the uterus. It is estimated that 70 to 80 percent of women will develop fibroids in their lifetime, not everyone will develop symptoms or require treatment.

“The most important characteristic of fibroids is that they’re almost always benign, or noncancerous. However, that said, some fibroids begin as cancer — but benign fibroids can’t become cancer. Cancerous fibroids are very rare. Because of this fact, it’s reasonable for women without symptoms to opt for observation rather than treatment”.

Types of Fibroids Different types of fibroids cause different symptoms. For example-